Under The Flag on The 4th of July 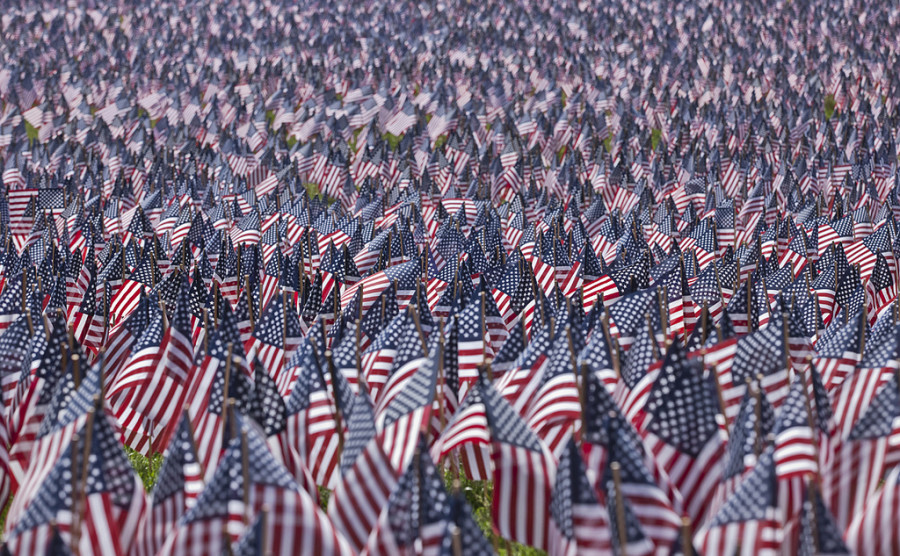 UNDER THE FLAG: CELEBRATING FOR ALL THE WRONG REASONS
By Dr. Aviva Boxer, OMD

I can see all the thousands of American Flags grounded into the graves of hundreds of thousands of soldiers buried in the Arlington National Cemetery. What a glorious sight on this fourth of July: the birthday of our freedom. All those soldiers died for the idea of our freedom. Or did they? Is that all they died for, and is it all there was?

Maybe we say thank you in a prayer. Maybe we put flowers on their grave. Maybe we sing the National Anthem or fly our American Flag in front of our homes. But we are still missing the point. It is not only that these souls died for our freedom. Their legacy was so much more than freedom. And recently, that legacy is going to dust just as their bloodied, torn bones have. It is time to look beneath the flag, to unearth the real reasons those souls stood firm. Time to look beneath the overused sound bytes, stirring big patriotic music and crisp pretty pictures of our flag. It is time to look beneath the flag to the trail these soldier’s legacy really left for us to follow.

It is a calling.

These soldiers heard not a whisper, they heard a command. A command to their hearts and souls, even if no one else heard it but them. And they were determined to follow. These soldiers leave a path that they blazed, where the command took them. They leave the trail of their legacy for us to follow.

The legacy of these fine, committed human beings is much more than Freedom. Freedom is only part of the legacy. These soldiers heard the language of character. They wanted to speak that language. They wanted to feel that language in their bones, whether they were understood or not. That language still vibrates in the disintegrated bones beneath the earth in those thousands of flag marked graves.

Those soldiers wanted to viscerally feel freedom, yes. But they also wanted to feel loyalty, integrity, commitment, generosity, appreciation, bravery, courageousness, daring, decisiveness, dependablity, determination, pride, skillfulness, trustworthiness, and the thrill of being adventuresome. And they wanted to be understood for those hard fought for expressions. They wanted to speak the language of character with more than their fellow soldiers. They wanted to speak it with us. They wanted the reasons they went to the front line of life and death to matter. It was all about character, the universal language. They wanted their families at home to feel what they felt and carry it on into their everyday lives.

It is when a veteran comes home from wartime and hears nothing but the superficial, mundane, trite and irrelevant concerns and actions of the everyday American that many soldiers go back for another tour of duty to again speak the language they spoke with others who speak it too. It is often why the soldier does not re-acclimate well to a society that just doesn’t get it, and very likely never will. And the soldier often feels the hoplessness of ever being understood or that the value of his/her legacy will ever really being honored in the language he/she knows is the real thing.

The flag is the symbol, perhaps, to remember to speak the soldiers language, that intangible language, with one another, or rather speak that language with ourselves when we look ourselves in the mirror. The soldier had to speak the language of the intangibles to him/herself every time he woke up, went to sleep, faced the unknown, helped a fellow soldier, survived past pain, grief and loss or injury.

He/she took these character traits with him everywhere he went. He kept them in the wallet of his heart next to the pictures of his loved ones. Everytime he looked at his dogtag he knew he had invested in the reputation of his soul, and spoke the language of truth everyday to himself and his fellow soldiers.

One of the reasons the “Great Generation” is considered great is that the language of the intangibles, of character and reputation with self, was also a common language among everyone. Because there were many, many more soldiers in WWII, and there were many more soldiers that understood what personal reputation meant over material needs, ambition, fame, greed and gratification. Because many returning soldiers all spoke the same language of the intangibles, and the enforcement of the golden rule was within oneself, not the job of police, teachers, clergy or the government, it was a gentler time. That is one reason we love the ‘great generation’. It is also why the times seemed simpler, easier, cleaner.

And so, if we look beneath the flag, past the obvious freedom, let us appreciate the true legacy of the soldier by speaking the forgotten language of the intangibles, the language of character. Let us speak it with eachother. More importantly, let us speak it with our own internal reputation, the Jimminy cricket of our soul.

And only then, will the fourth of July be more than barbeques, fireworks, a day off from work, or a day you take out and hang the dusty old flag. Try taking out a mirror. And look within to see just how often are you are speaking to yourself in the language of character so that the legacy of the soldier lives on in you, and you become the carrier of their legacy to your children and your grandchildren. Only then, the true symbol of the fourth of July will be more than the American Flag. It will be a mirror, or a reflection in a pool of water, a cup of tea, or a mug of beer. Then when we see our reflection. We can feel what the soldier felt living and speaking the language of intangibles, the language of character, and we will have truly thanked the soldier, the keeper of character, by living his legacy everyday.

DrAvivaBoxer.com, best selling author and online authority specializing in End of Life education, products and services that go beyond grief and loss to the pinnacle moment of passage.

Tweet
← Graduation: The Glee and the Grief
If You Want to be Happy and You Know It, Then Cry →

One Comment on “Under The Flag on The 4th of July”